Despite progress in improving the quality of Europe’s lakes, rivers, coastal waters and groundwater sources, pollution, structures like dams, and over-abstraction remain top threats to their long-term health. A vast majority of Europe’s water bodies still fail to meet the European Union’s minimum target for ‘good status’, according to a European Environment Agency ‘state of water’ report published.

EU Member States have made marked efforts to improve water quality, by improving wastewater treatment and lowering the runoff of pollutants from farmland, according to the EEA report ‘European waters — assessment of status and pressures 2018’. Measures have also been taken to make barriers passable to migrating fish and restore degraded aquatic ecosystems.

While Europe’s ground water bodies, like aquifers, are in good health in most cases, only 40% of monitored lakes, rivers, estuaries and coastal waters achieved the  the EU Water Framework Directive’s minimum ‘good’ or ‘high’ ecological status during the 2010-2015 monitoring period, according to the report. The last EEA assessment in 2012 found a similar level of water bodies meeting ‘good’ or ‘high’ ecological status. The EEA assessment also looked at the quantitative state and over-abstraction of Europe’s groundwater and the overall chemical status of water bodies.

The EEA report gives an updated health check on over 130,000 surface and groundwater bodies monitored by EU Member States, based on the data collected and reported from more than 160 so-called River Basin Management Plans covering the period 2010 to 2015.

‘Thanks to the implementation of European water legislation in the Member States, the quality of Europe’s freshwater is gradually improving, but much more needs to be done before all lakes, rivers, coastal waters and groundwater bodies are in good status. Tackling pollution from agriculture, industry and households requires joint efforts from all water users throughout Europe,’ said Karmenu Vella, EU Commissioner for Environment, Maritime Affairs and Fisheries.

‘We must increase efforts to ensure our waters are as clean and resilient as they should be — our own well-being and the health of our vital water and marine ecosystems depend on it. This is critical to the long-term sustainability of our waters and in meeting our long-term goals of living well within the limits of our planet,’ said Hans Bruyninckx, EEA Executive Director.

The EEA water assessment is the second since 2012. Knowledge of Europe’s waters has grown significantly since then, providing a better understanding of the status, the problems that lead to failure in achieving ‘good status’ and the measures implemented to generate improvement. The EEA report complements a forthcoming European Commission report, which will assess to what extent the Member States comply with the Water Framework Directive. This Directive sets out a framework on how to assess, manage, protect and improve water quality across the EU. It requires Member States to produce River Basin Management Plans (RBMPs) as well as a Programme of Measures to improve water quality. 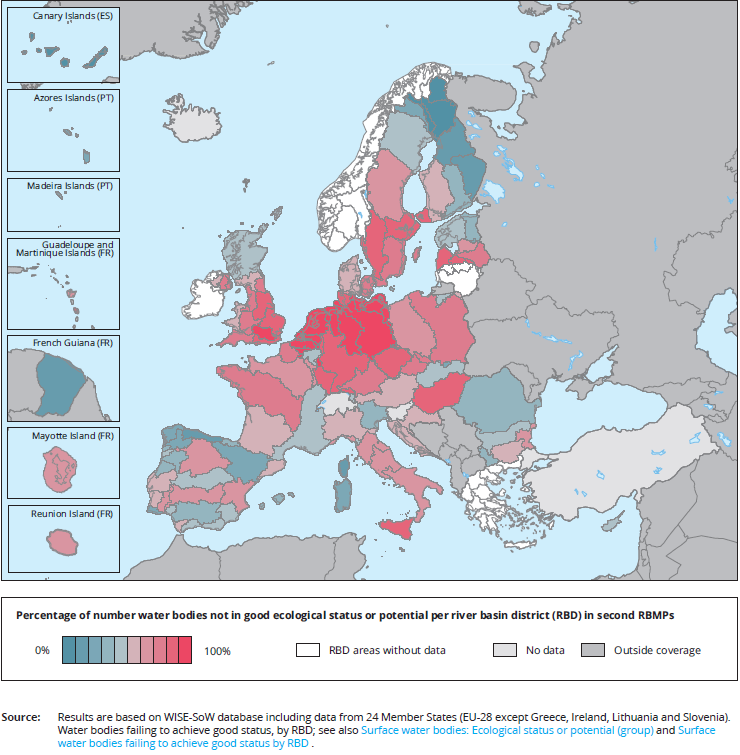 Achieving good status involves meeting certain standards for the ecology, chemistry and quantity of waters. Ecological status is the best overall indicator of how healthy a body of water is. It takes into account how pollution, habitat degradation, climate change, and other pressures like the number of man-made dams impact the quality of the water.

The top pressures responsible hindering progress  in meeting the EU targets include barriers like dams, land reclamation, and channelization, which change the flow of rivers or streams; diffuse source pollution like farm run-off; and point source pollution such as waste water discharge from sewers. The main impacts on surface water bodies are nutrient enrichment, chemical pollution and altered habitats due to morphological changes.

Monitoring and reporting are the main tools used to classify the health of EU waters. EU Member States define the status based on a scale from high, good, and moderate to poor and bad status for surface waters and two classes, good or poor, for groundwater. Monitoring is meant to track the effectiveness of measures to clean up water bodies and achieve the EU’s ‘good status’ target.

EU Member States are currently in their second monitoring and reporting cycle (2015-2021) under the EU Water Framework Directive. This round includes 89,000 rivers, 18,000 lakes, 13,000 groundwater sites, and 3,600 coastal and estuary waters. Reporting from Greece, Ireland, Lithuania and from parts of Spain could not be included in the report.

European waters are getting cleaner but big challenges remain as most of Europe’s #water bodies still fail to meet the #EU’s minimum target for ‘good status’. More in our new #EUwater report: https://t.co/Nh8HG4Mvpc pic.twitter.com/5Rc8MrM2Zw

Colaboraciones
FuturENVIRO Mailbox
Send us your feedback. Your opinion matters!

The FuturENVIRO website brings you the most comprehensive, thorough and up-to-date information on everything that's taking place at any time in the environmental sector.